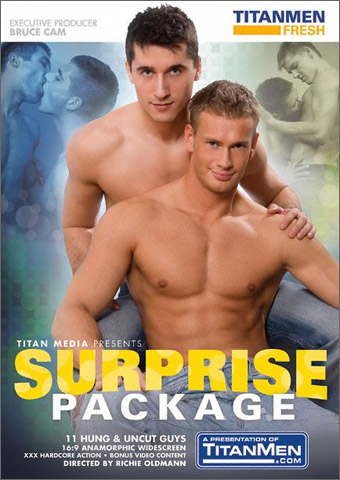 Cute couple Dano Janda and Arkady Beran are the last to arrive but quickly find an empty bedroom, strip out of their jackets and start making out; the guys get completely naked and Arkady practically inhales Dano’s juicy dick. They flip and Arkady lies back on the bed while Dano slowly gorges himself on Arkady’s hefty cock. Dano tongues Arkady’s tight asshole to tease it open, then flips him on his back and plunges his cock deep into his hot hole. Dano lies back and Arkady slowly eases his ass down onto Dano’s condomed cock and slides up and down the massive shaft with his legs spread wide and his own hard cock slapping against his hard abs. Dano lunges in and out of Arkady’s tight muscular ass to the point when he can’t take any more, then pulls out; they both stroke their cocks until they hurl two gigantic wads of sticky cum all over themselves and the bed.