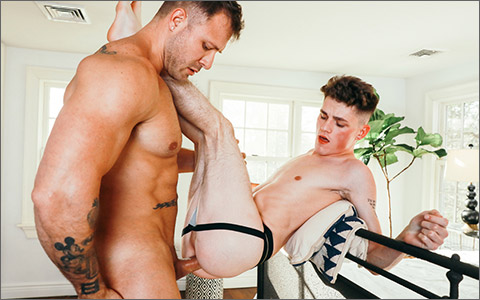 Avery Jones has had a longtime dirty fantasy about daddy Austin Wolf while also being nervous about being with someone so big and intimidating. Those nerves fade though as Austin seduces Avery with loving kisses and partially strips him down. Avery melts as Austin tongues and fingers his tight hole before teasing it with his hard cock and slowly working it in as they stand next to the bed
With Avery moaning against his massive body Austin lets him work his hole on his cock. Austin asserts more control picking up Avery and using the bed’s footboard to fuck him mid-air & standing up before turning him around for more mid-air fucking. As Avery holds the bed rails, Austin thrusts deeper until he picks up Avery with his cock still buried in him and lays him on the bed to continue. But soon Austin lies back for Avery to suck him.
After enjoying Avery’s devoted deep sucking Austin has him ride his cock and take his thrusts & more kisses. Using his power Austin fucks Avery upside down and on his lap before lying him down to suck him sweetly. It isn’t long before he lies next to Avery and holds him close to drill him. Soon Austin pulls out, shoots his load and finishes inside Avery, still pumping until he makes him cum. Austin has a quivering second orgasm but gains his composure to again kiss Avery, definitely no longer nervous. 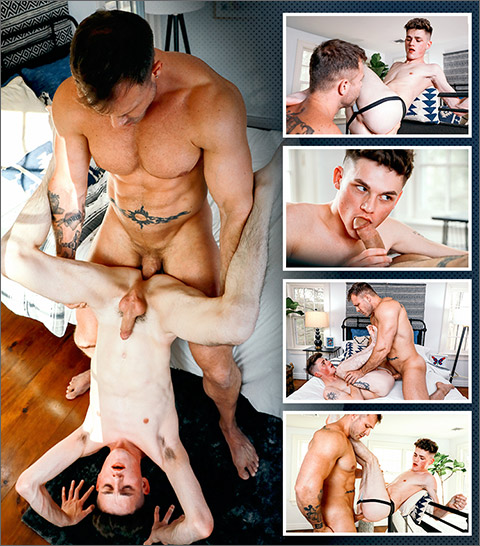