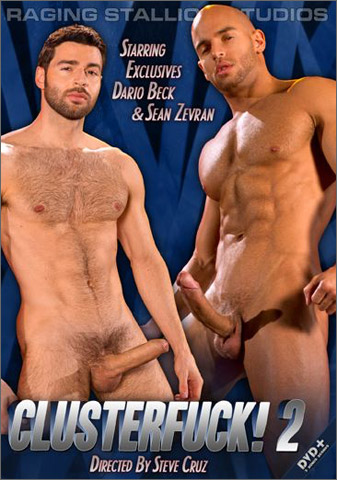 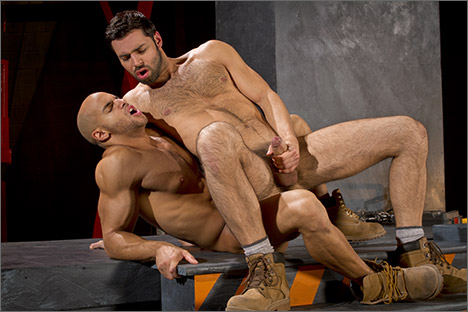 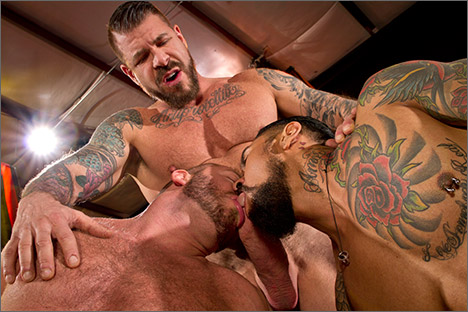 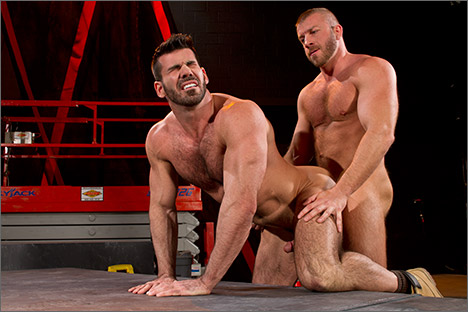 SCENE 3: Hunter Marx fucks Billy Santoro
Fur and muscle collide when Billy Santoro and Hunter Marx hook up in the warehouse. Their jock straps are so worn and crusty, you can almost smell ’em. Their abs are ridged, their nipples are hard, and rock-hard cocks emerge from the pouches of their jocks. Look close: Hunter has a finger or two in Billy’s hole. Those fingers make way for Hunter’s tongue, causing Billy to dip and sway and hold onto a step to stabilize himself. Now is a steady rocking pattern, he orders, “tongue fuck me; get it wet; lick my balls.” By then, Hunter has such a steely erection that if he doesn’t stick it in Billy’s hole it’s going to burst. Billy wants to get fucked as hard and fast as Hunter is able, and he puts his muscular glutes to work to help. They’re so into it they work up a powerful sweat. Billy’s nuts pull up so tight in their sac, it won’t be long before he shoots. They lock tongues and grab their cocks. Hunter pipes his hot load straight into Billy’s mouth and licks it out again while Billy’s sprays across his abs. 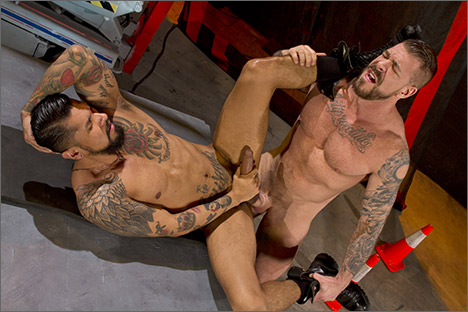 SCENE 4: Rocco Steele fucks Boomer Banks
Boomer Banks and Rocco Steele, both heavily and colorfully inked, line up head-to-tail — a good position to suck a guy’s cock or eat his ass. There’s a lot of cock here. This duo has so much meat between their legs, it leaves you wondering who’s going to bottom. But it’s undeniable that Rocco is an ass pro, and he’s doing such a good job on Boomer hole that Boomer can’t even focus on sucking. Rocco knows his way around an ass: he spits, sniffs, probes and teases with tongue and fingers, sometimes using multiple fingers to stretch that hole wider. Boomer gets Rocco’s cock real wet and works it with his mouth and hand, but he’s fully aware what he wants. He flips around and slowly impales himself on Rocco’s massive wide tool, inch by fat inch, while sticky juices drip from his hole down the shaft of Rocco’s cock. Grunts and moans of satisfaction echo from man to man. Rocco increases his speed and intensity, and they take turns stroking Boomer’s cock until they both explode in white hot loads that Rocco swallows and snowballs.

Members at RAGING STALLION’S MEMBERS SITE can watch these scenes and download extensive Photo Content from this production.