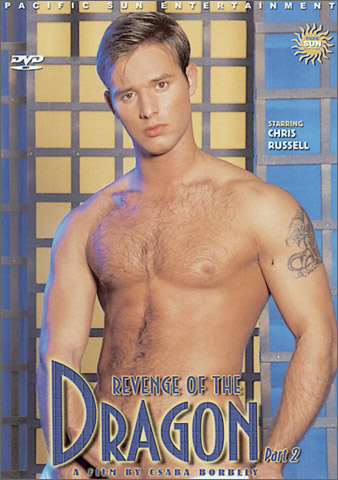 Perennial bottoms Leslie Manzel and Roberto Giorgio, both handsome as hell, shine in their scenes with studs Jonathan Collins and Tom Browne. Collins grabs Manzel’s legs and spreads them wide, spearing the buff Manzel’s ass with his cock. Collins then does a hands-free in and out fuck, completely pulling out of Manzel’s dripping, sloppy hole before slamming into it again.

Giorgio’s scene with Browne is no less impressive, and it is inventive as well. Sinewy Tony Magera and another stud join the two, and Browne fucks Giorgio while the other hunk rides Giorgio’s uncut meat. Then Magera fucks the stud while he rams into Giorgio’s ready hole. It’s a very hot and very unusual four-way.

Delectable stud Janos Volt also bottoms for both lightly furred blond Chris Russell and darkly handsome Anthony Okamoto, first sucking the two studs, then getting his ass filled by both of their cocks, one after the other.

The finale is another four-way, with two young stud pups (Eddie Shulz and Daniel Paxton) watching as old hands Fred Goldsmith and Peter Krystia put on a show by kissing and stroking each other, then getting massive erections. A complete merry-go-round of combos and positions follows, with Goldsmith and Shulz both getting plowed, and Shulz riding Paxton as his very hard, very large cock bounces in the air.