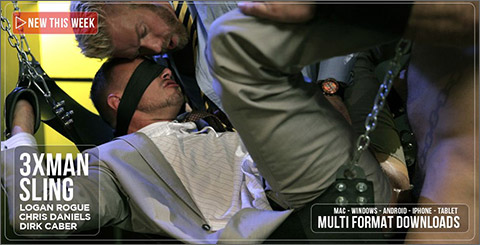 After his last visit to the sex club, it seems that Logan Rogue’s appetite for sleazy sex has been awakened. And this week he makes a return to the dark dungeon in search for some hot, sleazy men to get used and abused by. He soon comes across leather clad, muscle daddy Dirk caber who pushes him to his knees to service his hard cock. Logan sucks obediently, swallowing every inch of that delicious, thick meat. Dirk then throws him on the sling, restraining his arms, blindfolding him and ripping open the back of his suit trousers to expose his smooth, hungry hole which he rims and eats, getting it nice and moist for a seriously hard sling fucking. Much to Logan’s pleasure, as well as that of a sexy stranger standing by, stroking his hard dick and enjoying the sleazy show. Dirk invites the suited stranger to fuck Logan’s ass, both of them now taking turns to tag fuck their suited sex slave who has no idea who’s fucking him or even how many dicks are fucking him, till they remove his blindfold and surprise him with a double cum shower all over his body and face.