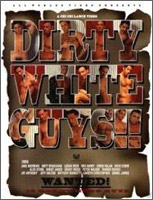 Sex so dirty you can almost smell it.

Chi Chi LaRue puts together 16 of the hottest stars in gay porn for an all out suck and fuck fest in a sleazy sex club warehouse setting. Logan Reed starts out the action, doing a sexy strip tease club and Rod Barry is getting worked up just at the site of the hairy hung stud. Rod isn’t the only one enjoying the show. In a corner Jay Anthony is getting sucked off and Gareth Christopher, a sexy blond is sitting back in a chair stroking his uncut cock while watching the action unfold.
Jake Andrews turns the heat up when he starts fucking Matt Bradshaw. While Matt is getting his hole pounded he’s sucking off Gareth, who has decided to get in on the action. Before long Jake is craving cock and lets Gareth shove his big dick up his ass.
The action in the club continues with Drew Nolan getting sucked off by Grant Wood. Drew rewards Grant with a hot facial that leaves him with cum dripping off his face.
The action continues and Rod Barry has dropped his pants so that Logan can suck him off. Brent Cross walks into the scene and starts jacking off. Peter Wilder and Tanner Reeves jump in and take turns sucking Brent’s cock, while on a balcony Anthony Mengetti and Daniel James watch and stroke their dicks.
The action erupts into a full on orgy with Logan Reed, Gareth Christopher, Drew Nolan, Anthony Mengetti and Daniel James on the balcony sucking each other. On the floor of the sex club Brent Cross, Jake Andrews, Rob Barry and Jeff Dalton are laying on top of one another while Peter Wilder eats their asses out one by one. Tanner Reeves is bent over on his hands and knees so Jay Anthony can tongue fuck his hot hole.
The cock sucking and rimming gets everyone in the mood for more sleezy action. All 16 of the guys gather on the sex club floor where they take turns fucking Ricki, Peter and Anthony. Jay joins the bottoms letting Jeff fuck his ass while Brett shoves his cock down his throat. The two take turns pounding Jay’s open holes until he can’t take anymore.
The guys end up in a 16 man suck chain that features the entire cast of the video slobbering and sucking one another’s cocks until they are ready to blow in one big circle jerk.

WATCH IT NOW, BUY IT, MORE INFO: CHANNEL 1 / ALL WORLDS