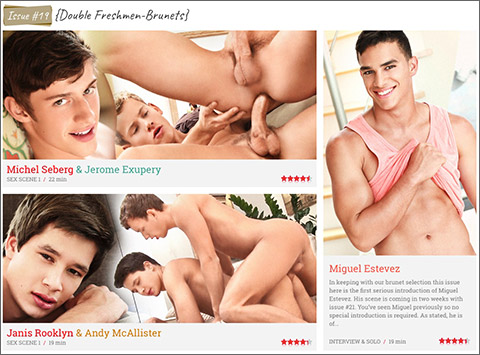 Michel Seberg & Jerome Exupery
Our plan was to have two brunets, Michel and Rocco, here. Unfortunately, Rocco had no time, so Michel ended up training with Jerome.
Michel Seberg is more flirtatious than frenetic, more bashful than bold. While he may not be a ball of fire, I suspect that his sexy smile and quiet seductiveness will melt the hearts of many of our members. It is this sensuous quality which, I believe, makes him the stronger of today’s candidates. As always, I await your opinions.

Janis Rooklyn & Andy McAllister
Can there be too much of a good thing? That might be the case with Janis Rooklyn. Janis is a good model and a worthy performer and this is a fine scene that I’m sure you will enjoy. But, there is currently a large influx of good models and, as much as we’d like to, we can’t keep them all. I don’t know whether Janis will measure up to the other models we have in store.
Either way, please enjoy this nice and genuine newcomer scene with Andi McCallister.

INTERVIEW & SOLO: Miguel Estevez
In keeping with our brunet selection this issue here is the first serious introduction of Miguel Estevez. His scene is coming in two weeks with issue #21. You’ve seen Miguel previously so no special introduction is required. As stated, he is of Hungarian origin, probably with some Roma ancestry like Andry Boleyn.
He is the prototype Latin heart-throb who’d look at home anywhere from Columbia to Andalusia. Definitely in my opinion he could play a young Sheikh from Lawrence of Arabia as well.