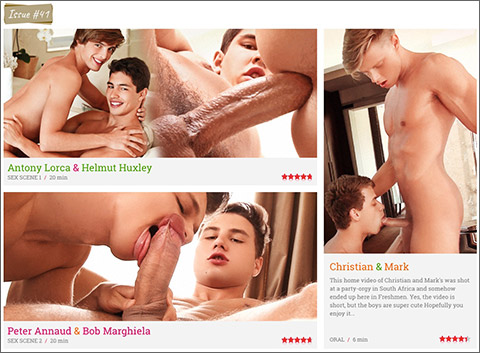 Antony Lorca & Helmut Huxley
The following scene of Helmut Huxley and Antony Lorca was filmed for and scheduled as part of “Last Summer in Greece” But I was being geographically incorrect as these scenes were filmed in Africa. I was descended upon by the purists annoying me into cancelling it I wonder if the director of Chicago, who filmed it in Canada, had this issue? So, you will have to ‘suffer’ with having this scene – featuring two beautiful guys with big dicks- here. Somehow, you’ll manage.

Peter Annaud & Bob Marghiela
Bob is Peter’s dream partner Bob excels at blow jobs, can endure any sized dick, is well-equipped himself, and fucks with intensity I guess that would make him just about everyone’s dream partner For those who feel we’re overdoing it with big dicks this week, I promise we’ll have a small-dick edition later to make up for it.

ORAL: Christian Lundgren & Mark Sullivan
This home video of Christian and Mark’s was shot at a party-orgy in South Africa and somehow ended up here in Freshmen. Yes, the video is short, but the boys are super cute Hopefully you enjoy it…