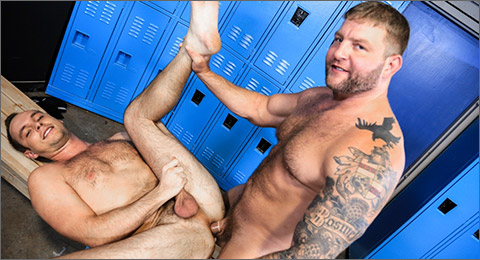 Colby and Devin are back in the locker room after their latest scrimmage match of their Adult League Rugby Team. Devin is upset because he is not getting to play and frustrated because after all, this is supposed to be a ‘fun league for adults!’ Colby assures him he will get time, he just has to pay his dues. He then plants a big wet kiss on Devin who does not resist. Soon both are fondling each other and then Devin drops to his knees and sucks Colby. Colby returns the favor and sucks Devin for a while before turning him around and fucking him up against the lockers. Colby fucks him slow at first, but the intensity builds as he moves Devin to the bench. Once Devin is on his back Colby fucks the cum out of him and then shoots his own load all over Devin.