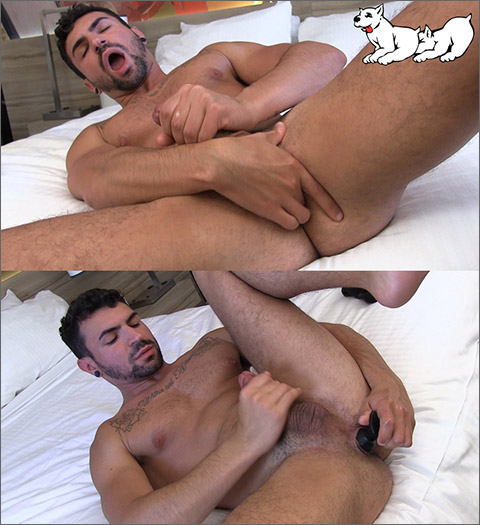 23 year old Ian Greene is a lean, rock-solid young man who has only been in the adult industry for about a year; but, he’s already made himself quite a name. Today he’s making an appearance on Badpuppy doing a solo video for us. After the interview Ian does a little strip tease for us as he slowly undresses and caresses his hot, tight body. Rubbing his cock thru his shorts starts to make everything come alive. Ian stands up, strips off his shorts, lubes up his already aroused cock and starts jerking. Pulling his legs back gives us an awesome view of his asshole which he starts stimulating with his fingers. With one hand working his cock and the other teasing his hole, Ian’s eyes roll back in his head from pure pleasure. He reaches over, picks up a butt plug and begins working it up his ass while the other hand continues to jerk his cock. Ian rams the butt plug harder and harder, his jacking rate increases and with a burst of energy Ian shoots his load of jizz all over his rock hard abs. With a final parting glance he scoops up his cum with his fingers, tastes it and gives a wink to the camera.