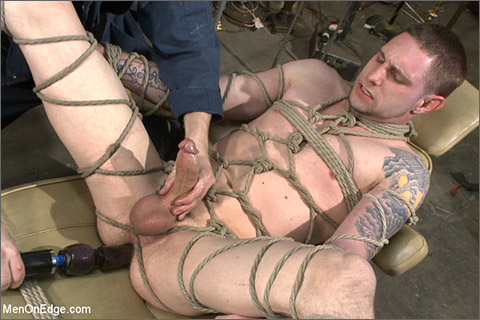 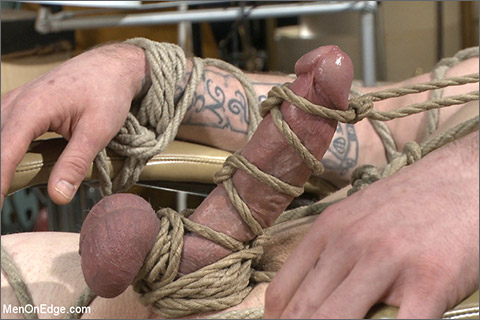 Sebastian is working part time in a warehouse to earn some extra money when he notices his hot straight co-worker, Jay Rising. When Jay least expects it, Sebastian pounces on him from behind and quickly ties him up. He calls up Van to come join in on the fun and the two tear away Jay’s clothes as he’s bound and blindfolded. The straight stud is a little feisty so the two pervs smack him around till he’s ready to submit. He settles down as the two get his cock nice and hard, teasing him with hitachi’s vibrating on his cockhead before going off to take their break. Tied up in the chair, Jay moans in his bondage as Van ad Sebastian enjoy a cup of tea. They torment the bound stud by taking a gulp of tea and spitting it back onto Jay’s hard cock. When Jay threatens to tell on the two pervs they take some blackmail photos of Jay sucking Sebastian’s cock for insurance. Jay then has a vibrator shoved up his ass as the two pervs continue to edge his cock with the fleshjack. The pervs shove a prostate massager up Jay’s butt as they milk a load of cum out of his cock and give him some post-orgasmic tickling. 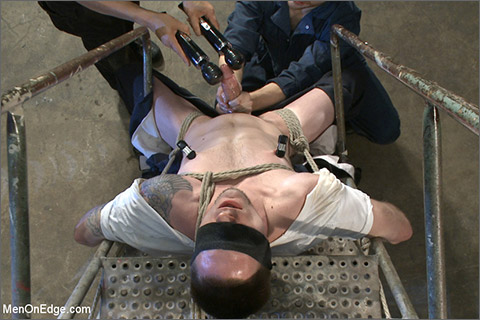