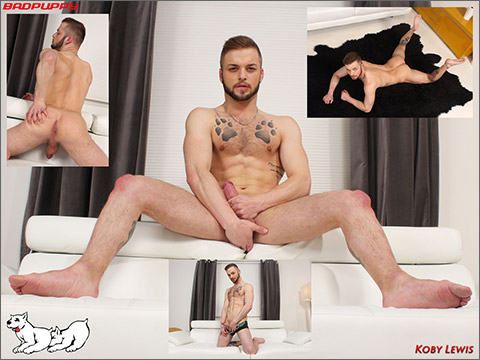 Koby Lewis is a barman from southwest England whose hobbies are working out and swimming. From the looks of those rock-hard, ripped abs I would say that between his exercising and diet his regimen is paying off. After a brief interview, Koby strips down to his underwear, lies back on the sofa and begins massaging his cock still confined in his shorts. Koby stands, pulls of his underwear, grabs his cock and with a little spit gets to stroke his thick, uncut cock. It’s not long before Koby turns around and bends over the sofa; showing off one of the hottest asses around. His fingers start playing with his hole. Koby lays down floor and slowly inserts his fingers into his ass. He moves his fingers in and out and jerks his cock in the same rhythm. Kody works his fingers more quickly; his cock stroking rate increases, and it’s not long before he blows a thick, juicy load all over his six-pack abs.