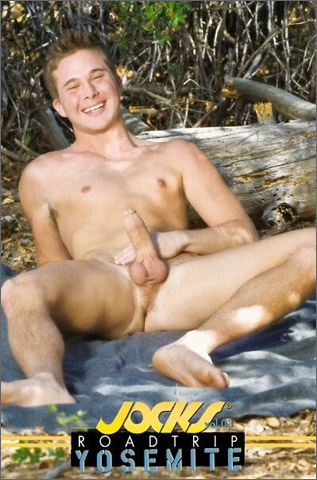 SCENE 1:
Kyle Pierce, Trystian Sweet and Austin Kent kick off this trip’s shenanigans with an enthusiastic romp in the confines of the RV. Trystian and Austin go to town sucking Kyle’s cock to hardness, preparing him for the big fuck to come. The three moan in ecstasy as they nurse on each other’s dicks. Repositioning themselves, Austin is middleman sucking Trystian’s cock while Kyle eats his ass. Then it’s Kyle’s turn on all fours, gulping on Austin’s cock while Trystian rams his tight hole. Trystian picks up the pace as Kyle furiously beats his meat until he can no longer hold back. One by one they climax with explosive spurts of mancream.

SCENE 2:
Bosco Blu and Landon Cruise wander about looking for an old mining cave, but end up excavating and exploring each other’s holes. Alone in the woods, Landon is down on his knees so Bosco can facefuck him, both men cooing with excitement. Spread out on a blanket, Bosco returns the favor and vigorously sucks Landon’s stiff prick. With Landon’s legs stretched high and apart, the hunky blond rims his hole. He plunges one finger, then two fingers up the spit-slicked sphincter, preparing it for the fierce fucking that quickly follows.

SCENE 3:
Nathan Sommers, Kyle Pierce, Trystian Sweet, Austin Kent, and Ago Viara are poolside downing some beer and soon each other’s cocks. Austin and Trystian work on Kyle and Nathan’s dicks while Ago stands ready for his turn. They all maneuver around each other so that everyone gets in on the action and a vigorous suck-rim-fuck session ensues. Bosco and Landon join in the fun and all 7 young studs get it on even more intensely than before.