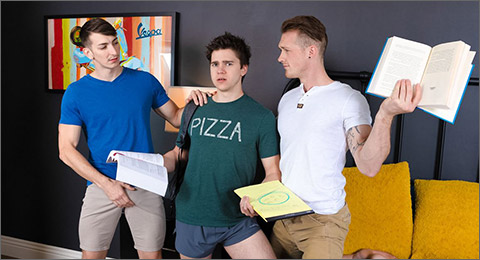 Michael Jackman and Jackson Cooper are bored as hell and looking for some action, thinking roomie Will might be the perfect distraction for a boring afternoon. The only problem is that Will Braun is hunkered down and studying for finals, but they begin tomorrow, and he just started studying like 5 minutes ago, so when Michael and Jackson come and demand that he take a 30 minute break, Will figures he’s fucked either way, might as well enjoy it. And while he may not know shit about Calculus, Will could pass his oral exam with flying colors, taking both of them in his mouth at the same time before taking a much deeper dive into the subject matter. Michael and Jackson aren’t any smarter than Will when it comes to science stuff, but like him, their fucking abilities are truly head of the class material. Maybe all three of them should forget about college and just do porn instead.