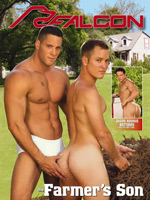 The classic dirty joke about the “Farmer’s Son” gets made even graphic in this sexy tale of a city boy going head-to-head with a seductive country boy. It features one of the most anticipated scenes of the year where legendary topman Jason Adonis bottoms for the first time in his career. When his car breaks down on a deserted country road, Erik Rhodes knocks on the door of a stranger, seeking shelter, having no idea the sexual escapades in store for him. Logan Steele allows him to stay under one condition: Stay away from his son, Jessie Zane… or else.

SCENE 4:
Jessie Zane is doing some hunting himself: He’s still focused on defying his father and seducing his house guest, Erik Rhodes. So he hatches a plan that if he succeeds will get his ass filled with Erik Rhode’s massive cock … but could get them both in deep trouble with Logan Steele.

WATCH IT NOW AT: FALCON STUDIOS