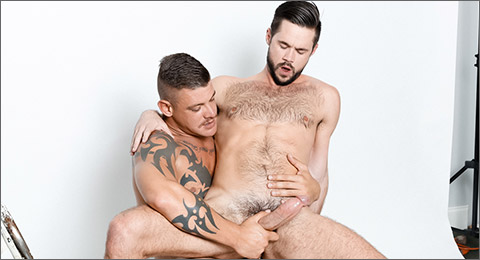 Mike has come to his friend Jace to take some photos of himself. Jace asks Mike what kind of photos he wants to get of himself and discovers Mike wants sexy photos for hook-up apps. The photo session begins and Jace gets Mike to get more and more undressed. Soon Mike is only in a jock-strap and Jace cannot help but to manhandle him a little bit. Soon, both are engaged in some heavy kissing and then some intense cock sucking. After each shows each other how great they are at deep throating a big cock, Jace bends Mike over and rims his ass. He then fucks Mike in several positions with the final being Mike riding Jace as Jace jacks off Mike’s cock until he explodes with a big cum shot. Jace then shoots his load all over Mike’s chest.