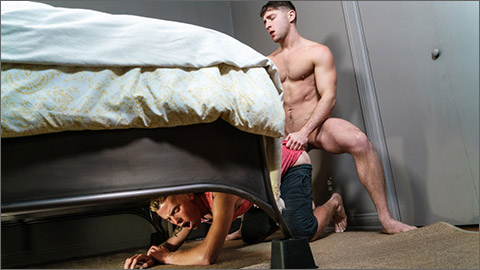 Twink Greyson Lane can’t believe his mom promised the car to his new stepbrother Calvin Banks just because he’s older, so he sneaks into the bathroom while Calvin’s in the shower to snag the keys. But Greyson gets distracted sniffing his step-bro’s briefs, and when Calvin catches him in the act, the tatted-up 20-year-old runs for it and drops the car keys under the bed! Greyson gets on all fours to retrieve them, and Calvin drops his towel and penetrates his stepbrother’s ass. Greyson had no idea that Calvin could be so obliging as he rides the top’s dick and gets fucked in missionary till he cums. Greyson may not get to take the car, but at least he gets a facial!