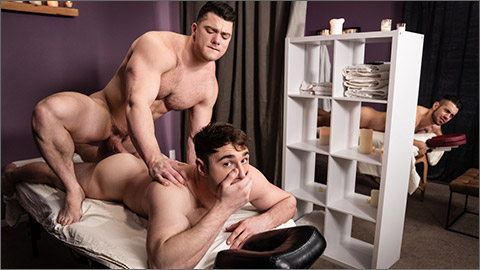 Rival gymnasts Michael Boston and Dante Colle are not pleased to discover they’ve been double-booked for a massage, but muscular masseur Collin Simpson assures the athletes that he can handle both of them at once. Dante gets jealous listening to Michael’s moans as Collin gives him a rubdown, so he sneaks over to his robe to put in a butt plug. When Collin spots the toy in Dante’s ass, he gives his booty a thorough massage before pulling out the plug with his teeth and eating his hole! Michael comes over to see what’s happening, but the guys agree there’s more than enough of Collin to go around. Dante sucks two cocks at once before Collin and Dante Eiffel tower Michael. Then it’s Dante’s turn to get fucked, and both Dante and Michael pound Collin’s tight ass before they cum and the burly masseur gives them both a facial.