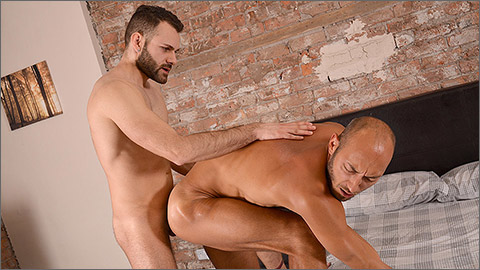 Wolf and Dominic demanded that this pairing happen, and we were more than pleased to oblige! To be honest, we’d already been planning it. The lust between these two hungry men is absolutely real, they were ready to tear into each other from the moment they met. The two suck on those hard uncut cocks like they’ve been craving it for months, but that’s only the start of the chemistry between them. Wolf doesn’t wait a moment when that tanned ass is offered, plunging his length into his new fuck buddy and ramming him deep. Check out the pile driving over the side of the bed! Both guys were edging their loads by this point, taking a break for just a moment before laying down and furiously wanking themselves off, splashing their hot loads out in unison! This is what happens when you team up two men who are genuinely hungry for each other, and we’re left wondering if we should film an encore.

On-Line Presentation. Members can Download from the Extensive Catalog of “Amateur” British Men.