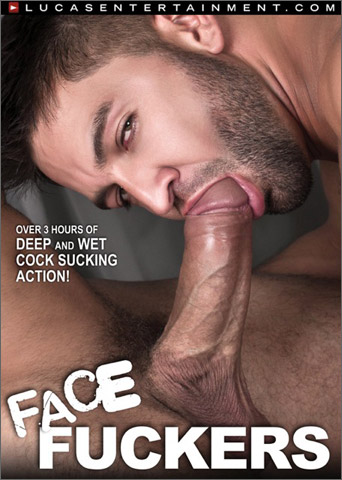 SCENE 2: Lucas Men Suck Dick the Best
Dominic Pacifico shows off his brooding good looks, handsome body, and beautiful cock in Johnny Venture’s mouth, during some bathtub play in the second scene of “Face Fuckers”! After Dominic and Johnny are finished, the Romanian muscle bottom Marco Sessions uses his mouth to pleasure Rafael Carreras, which is never an easy task but one Marco is up for! Vito Gallo and Trenton Ducati swap head in Greece. Tony Axel settles between Edji Da Silva’s legs to suck him off with delight. And Miles Racer submits his mouth to Adrian Long!

SCENE 4: Hot Guys Love Worshipping Dick
Brandon Jones has some jungle fever when he checks out JP Powers in the fourth scene of “Face Fuckers,” and he swallows his cock to prove it! Brandon isn’t the only one hungry for black dick: D.O. is hungry for a hung piece of meat, which Hot Rod provides. Edji Da Silva and Tyler Wolf slobber all over one another’s dicks. Dale Cooper kicks back and enjoys some oral service from Hunger Page’s twink mouth and tongue. And Hans Berlin blows the 10-inch uncut cock of Michael Lucas!