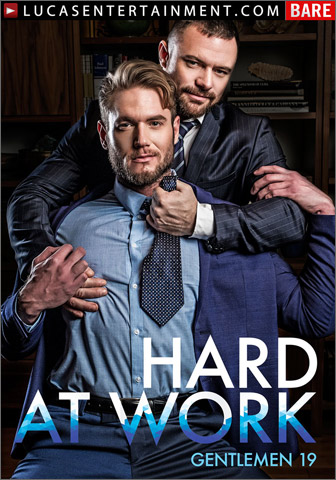 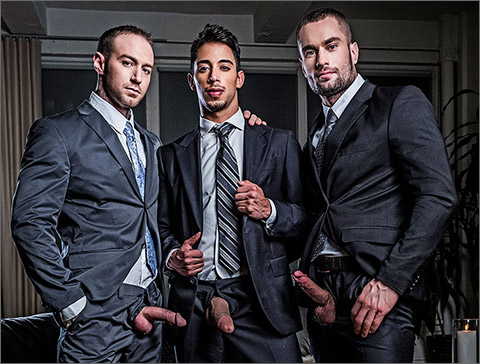 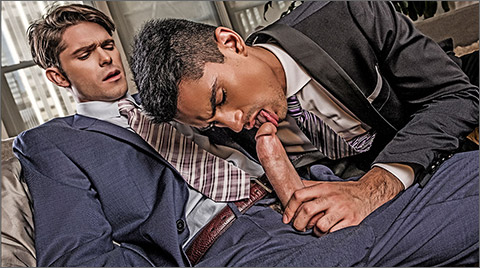 SCENE 2: Devin Franco And Lee Santino Flip-Fuck In Suits
Let’s face it: as a young executive, Devin Franco doesn’t get by with his business savvy. He sticks around the office when no one is there and fools around with the guys that matter. The young hotshot Lee Santino has had his eye on Devin ever since he started his job, and when the opportunity strikes, the two throw all business decorum out the window and get naked together. Lee has a kinky side and takes the time to loosen up Devin’s ass with an exceptionally large dildo. This gets Lee off big time, so he spins Devin around to fuck him in the ass with his own dick. He then flips and takes a ride on Devin’s hard bare cock. 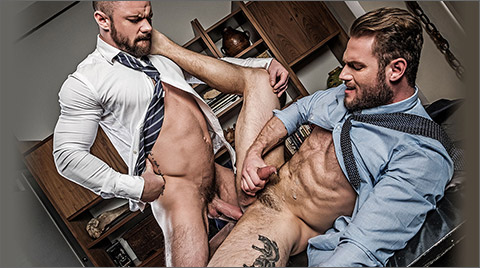 SCENE 3: Sergeant Miles Makes Ace Era Earn His Promotion
Sergeant Miles is cut from the same cloth as Dylan James: he’s in a position of authority, and he uses that to have gay bareback sex with his underlings. Ace Era has always found his boss, Sergeant, a true stud, but he never imagined Sergeant would put him in a position where he had to prove his worth by giving up his ass raw. But Ace, after all, has “FUCK ME” tattooed on his butt cheeks, so if there’s one challenge he’s up for, it’s servicing Sergeant Miles cock by shallowing it and getting pumped in his eager hole until the boss busts a nut. 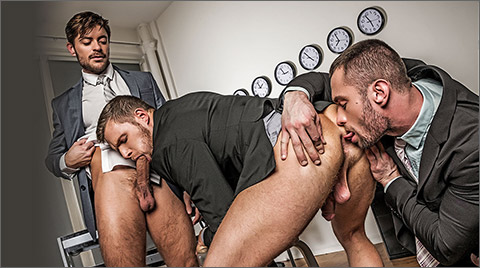 SCENE 4: Stas Landon And Jack Andy Double Penetrate Brian Bonds After Hours
It looks like Stas Landon learned a thing or two from his business mentor, Dylan James: if someone wants favoritism in the office, then they need to earn it. Stas is supervising two new employees he finds himself attracted to: Brian Bonds and Jack Andy. He gets a read that Jack is a wild pig and Brian was born to serve, so when everyone goes home for the day these three stick around. The bareback sex heats up when Brian opens up his ass for both Stas’ cock and nine inches of meat Jack has between his legs.