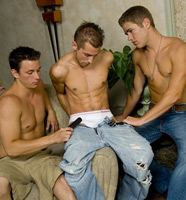 With the excellent responses I’ve been getting about our Summer Heat Stroke circle jerk video I couldn’t wait to do another one. I’ve assembled what I like to call our Freshman Class of Randy Blue- Brent Diggs, Joshua Young, Noah Driver, and Vinnie Griego. The reason these circle jerk videos are so much fun for me, and I hope for you guys too, is that for many of the new guys this is the very first time they’ve ever had any male to male interaction. Since a lot of my models are straight, they haven’t had too many experiences where they’ve been naked with another guy except maybe at the gym, and we all know that if you sneak a peek at another guy’s cock in the gym you can get yourself in a lot of trouble. Well, depending what gym you are in, I guess. So when you get a bunch of guys together who have never seen another guy’s dick up close, let alone touched one, and let them explore, it can be really hot. Sure they start off beating their own meat, eyes darting nervously around from cock to cock, wanting to look but feeling that they somehow shouldn’t. Of course, you know what happens once you have a hard on and the sexual heat stars rising, inhibitions start to drop and all a guy can think about is the pleasure he’s feeling in his throbbing cock. Furtive glances eventually give way to full on stares, exploratory touches and teases, and sooner or later everyone is getting into it. Plus, it’s a chance for them to explore their sexuality in way that they might not have had the opportunity before. And, they get to show off in front of the other guys. It’s really fun to watch how they start off. Who’s more aggressive, who holds back more, who is the more nervous about being naked around other guys and who doesn’t really care. It’s a good way for me to gauge who might be ready to take it to the next level and do a hardcore scene and who might be better doing a few more solos and a toy or two. And what’s more, the real fun is in going back after the guys have been on the site for a while and have done several hardcore scenes with a variety of other models and then watch how they were when they first touched another guy’s dick.