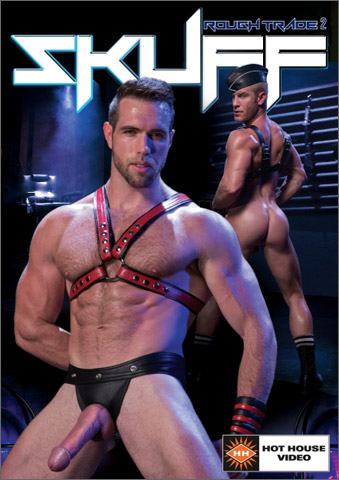 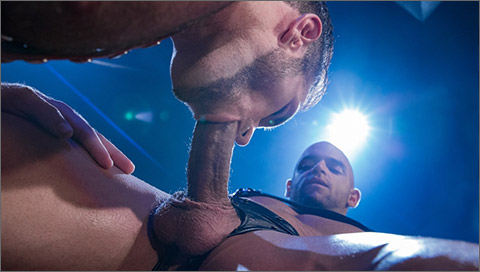 SCENE 1: Alex Mecum fucks Sean Zevran
Hairy-chested Alex Mecum, clad in red and black leather, presses his ripped body against Sean Zevran. Sean, wearing all black, kisses Alex passionately. Their beefy muscles and bulging jockstraps prove that these two studs are intent on intense, connected sex. Getting down on his knees, Alex rips the codpiece off Sean’s jock and inhales Sean’s hard, stiff cock. The oral worship gets Sean in the mood to reciprocate, and he expertly tongues the tip of Alex’s swollen mushroom head. Bending Sean over, Alex shoves his scruffy face into the crack of Sean’s perfect bubble butt, coating it with thick spit.
With Sean’s ass slick and slippery, Alex drives his cock deep into Sean’s prepped hole. Sean takes Alex’s cock doggy style, and the muscles in his body flex as he submits to Alex’s drilling. Sweat glistens on their ripped bodies as they pick up speed and intensity. After getting his hole stretched, Sean trades places with Alex for round two. Resting on his back, Alex throws his right leg over Sean’s shoulder, opening himself up to maximum penetration from Sean’s powerful dick. Sean moves to sit down and Alex stands over him as they both work their cocks. Sean shoots first, spewing thick, white cum onto his ripped abs. The sight of Sean’s load pushes Alex over the edge, and he jerks out a gushing stream of cum that splatters across Sean’s muscled torso. 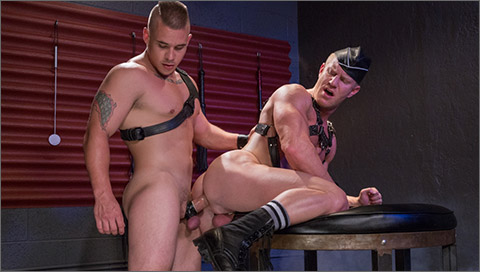 SCENE 2: Adam Bryant fucks Johnny V
Muscly barber Johnny V is strapped in leather, and he’s shaving tatted hunk, Adam Bryant’s head as he strokes his cock in the barber chair. Adam’s cock and balls bulge through his constricting cock ring during the haircut. Johnny checks his work, ditches his jock and hits his knees to polish Adam’s boots and dick. Johnny lowers his wet mouth onto Adam’s hard cock as he polishes his boots. Once Adam’s cock and nutsack are coated in Johnny’s spit, Adam bends Johnny over a padded Lazy-Susan and spreads his ass open wide to slink his tongue into. Licking from the tip of Johnny’s cock, all the way up to his winking hole, Adam buries his face in between Johnny’s cheeks. With Johnny’s hole lubed up in spit, Adam glides his meat rod into Johnny’s pink center with one swift thrust. Pounding from behind, Adam holds Johnny in place by his leather harness. Johnny switches to his back and gives Adam direct access to drill his prostate. Johnny’s screams intensify until he loses control and explodes thick ropes of pearly white cum onto his washboard abs. Seeing Johnny climax sends Adam over the edge and he bursts his hot load all over the inside of Johnny’s thigh. 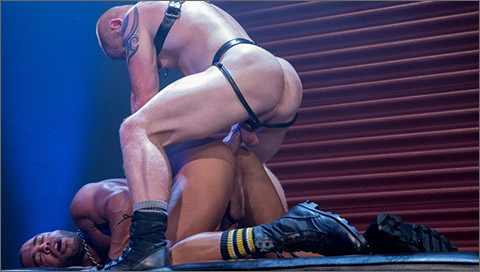 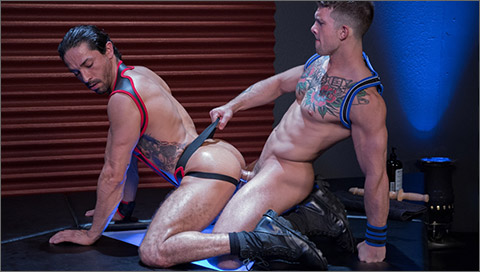 SCENE 4: Sebastian Kross fucks Mikoah Kan
Mikoah Kan is down on hands and knees and untying Sebastian Kross’ jock to reveal what hot, huge surprise lies underneath. After Mikoah unleashes the beast, Sebastian shoves his long cock down Mikoah’s windpipe without hesitation. The throat fucking commences and Mikoah takes Sebastian’s massive member fully and energetically. Sebastian returns the favor and gives Mikoah an intense and soaking wet rim job to loosen up his hole. Getting him ready for the power pounding to come, Sebastian breaks out a huge toy, working over Mikoah’s hole with a massive Manrammer, stirring it around in Mikoah’s gut. With Mikoah’s hole prepped for genuine cock, Sebastian fits his hefty meat into Mikoah’s eager hole. Mikoah stays down while Sebastian pile-drives his ass from behind. Switching positions, Mikoah hops on top and lets Sebastian fuck up into him until he lies on his back and takes Sebastian’s thick load in his mouth. With both of them drained, they share a cummy kiss.